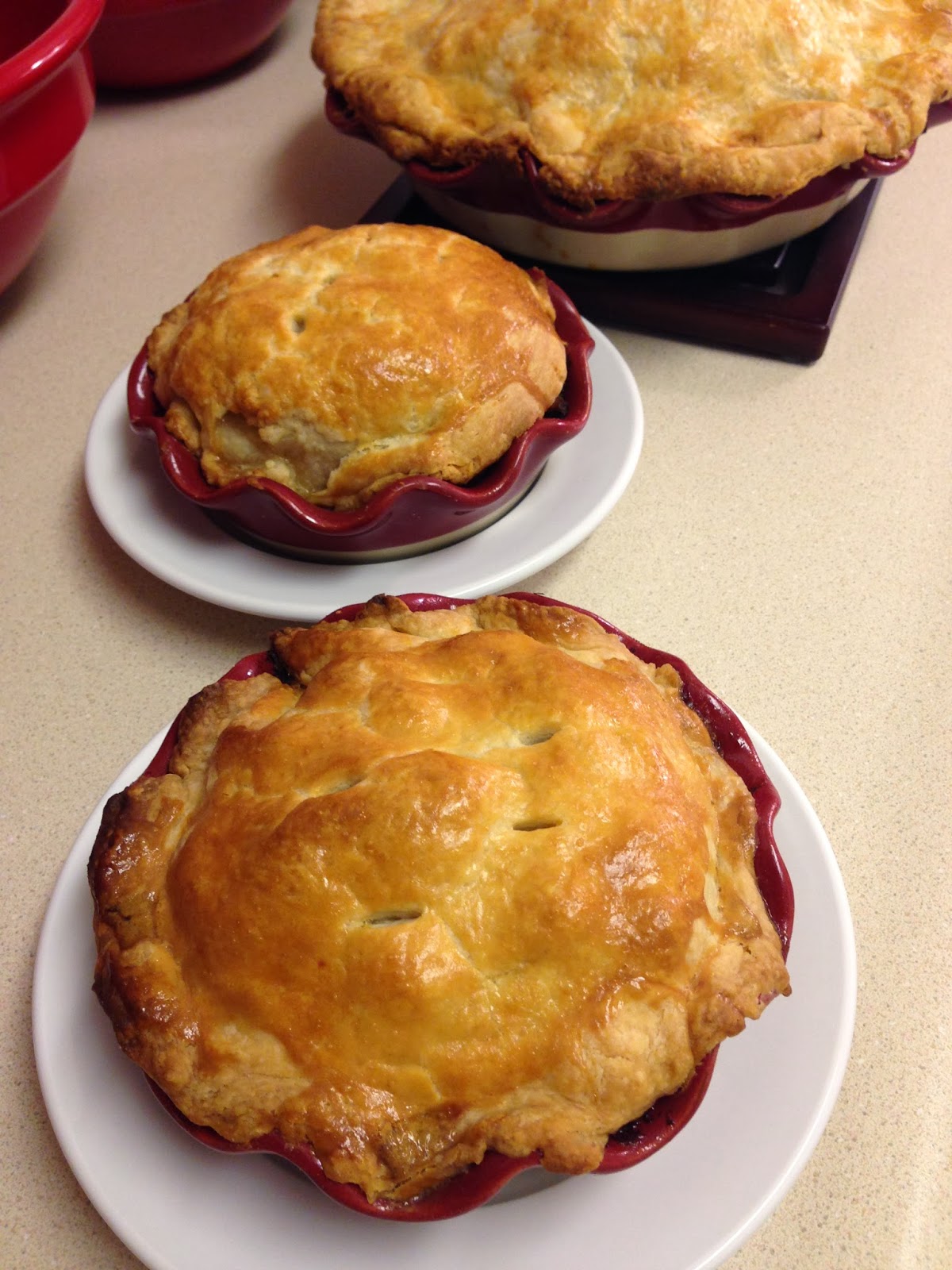 No repertoire for Christmas leftovers is complete without Turkey Pot Pie.  So for our second to last 7 X 7 Christmas Turkey Redux, we bring you a version of a classic English Turkey Leek Pie.

This is an original recipe but it takes inspiration from the tradition of English meat pies instead of from the American version.  English pies have great crusts, a minimum of liquid, can be held in your hand, and eaten on the run.  American pot pies have more liquid and their crusts are bread-like and easy to make.

In this pot-pie recipe, I was trying to call out some distinct flavors and high notes.  I did this by making a béchamel with lots of citrus notes.  Good Dijon mustard also gave the pie some complexity and depth of flavor.  The apples provided both sweetness and tartness that rounded out the citrus notes.  Of course the zest of two lemons gave the dish an overall brightness of flavor. 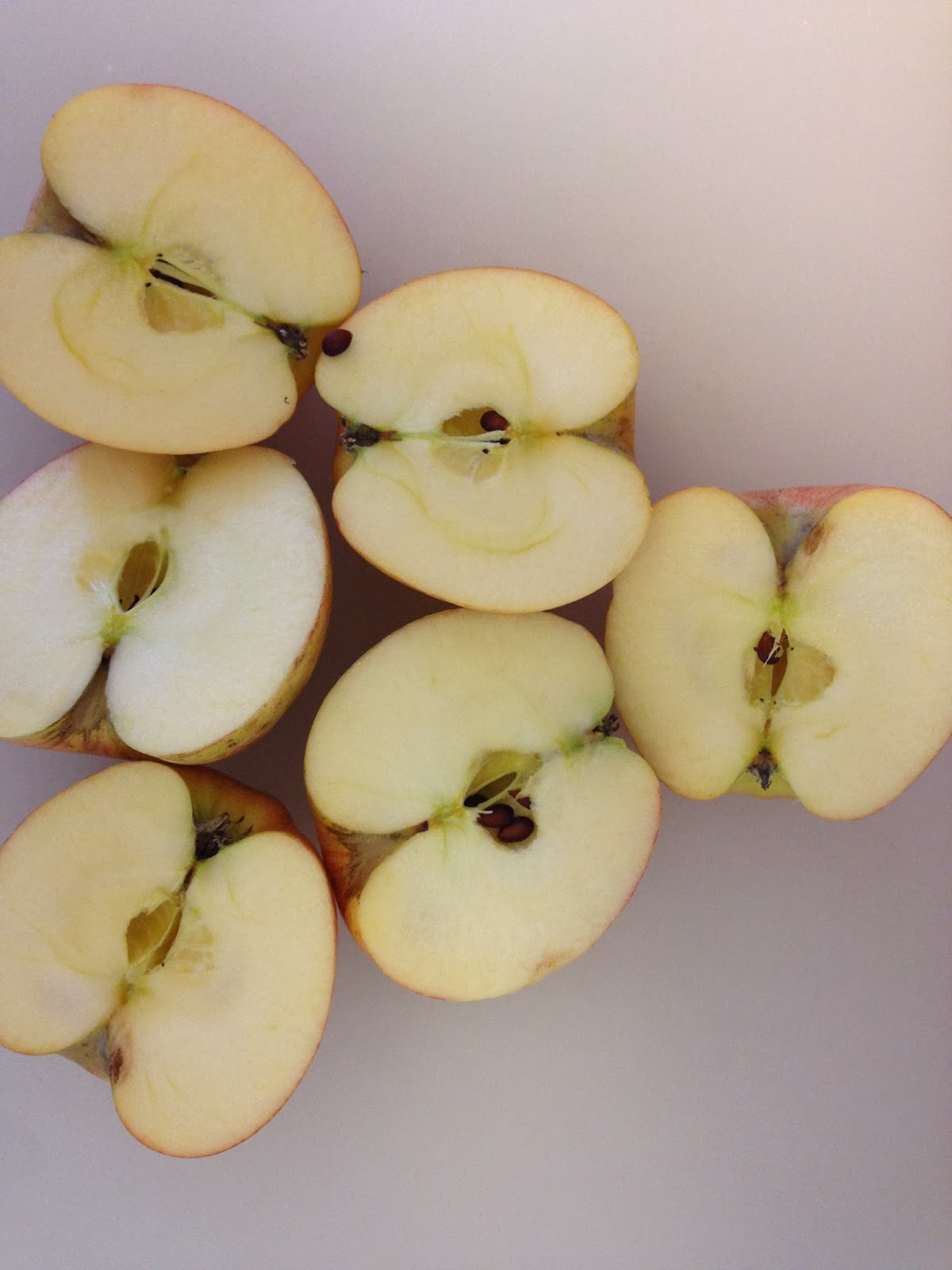 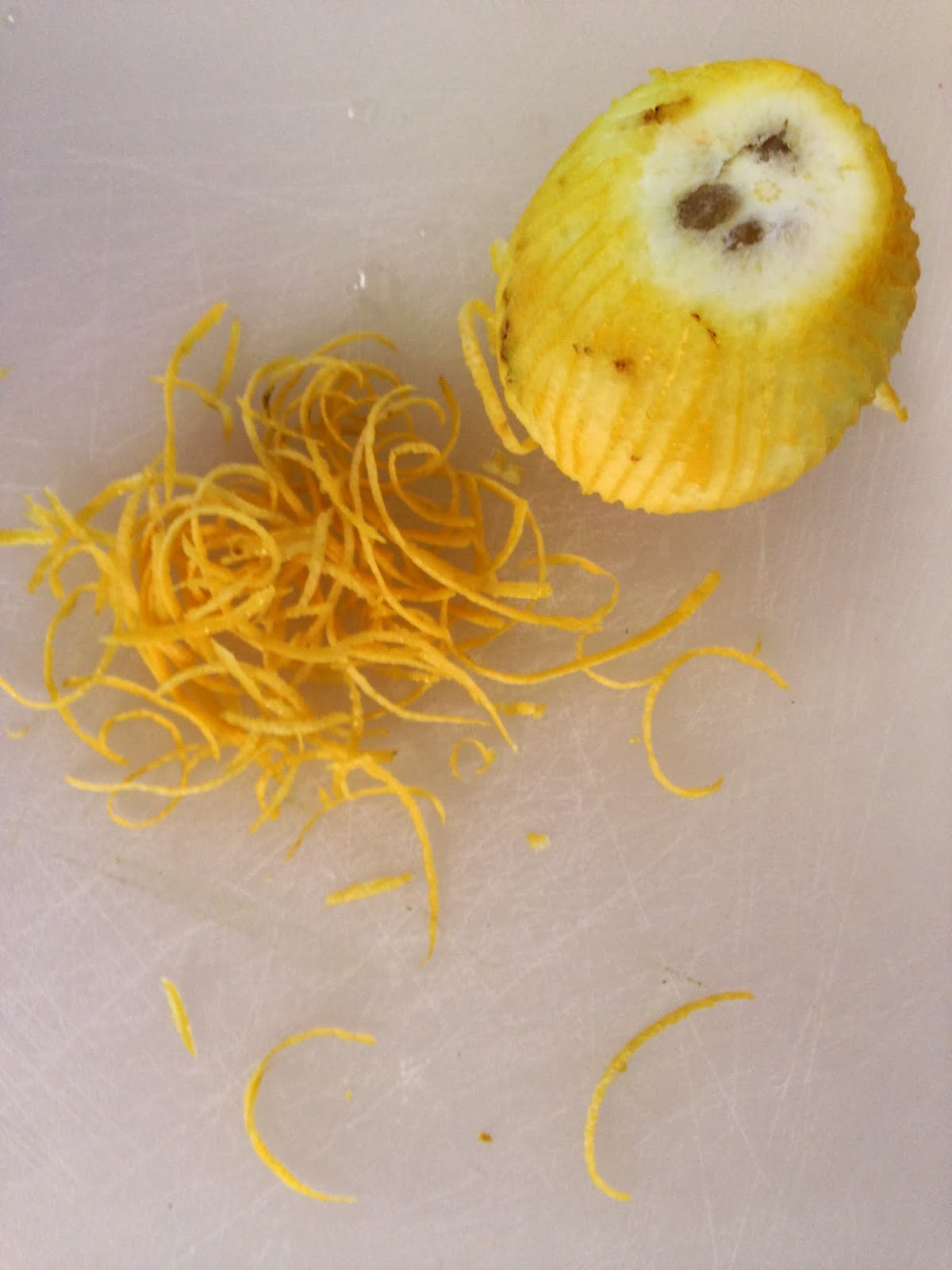 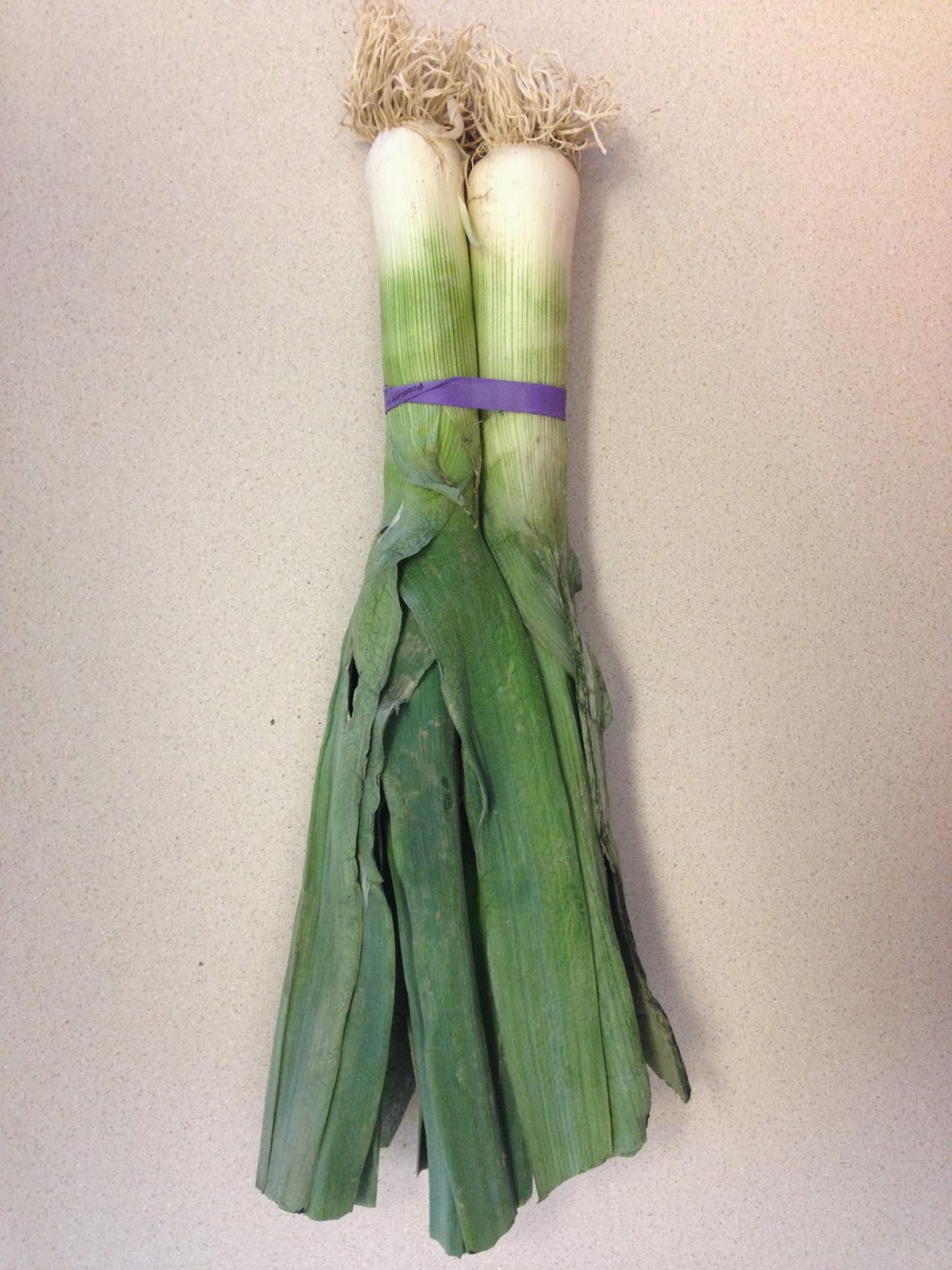 Let me warn you that this recipe yields one nine-inch round pie, a large rectangular pie, and two six inch pies that are piled sky high with meat and savory filling.  I made them all in a day but I would break up the work into three distinct tasks next time.  The first task is prepping, chopping, and sautéing.  There is a lot of prep here.  A tight and uniform chop of the leeks, onions, apples, and potatoes adds to the visual appeal of the pie and also helps to keep it together so a pie square or wedge stays in tact in your hands when you’re eating on the run.  The second task is deboning the turkey meat and tearing it into large succulent chunks.  Believe me.  Tearing the meat is worth the effort!  The third major task is preparing the pie dough and baking naked crusts.  With perfect hindsight, I would make the pie dough as well as roast, debone, and prepare the turkey chunks several days in advance.  Then, on the day of baking, I would prep the remaining ingredients, as well as wash, peel, chop and sauté the leeks, onions, apples, potatoes, and lemons. 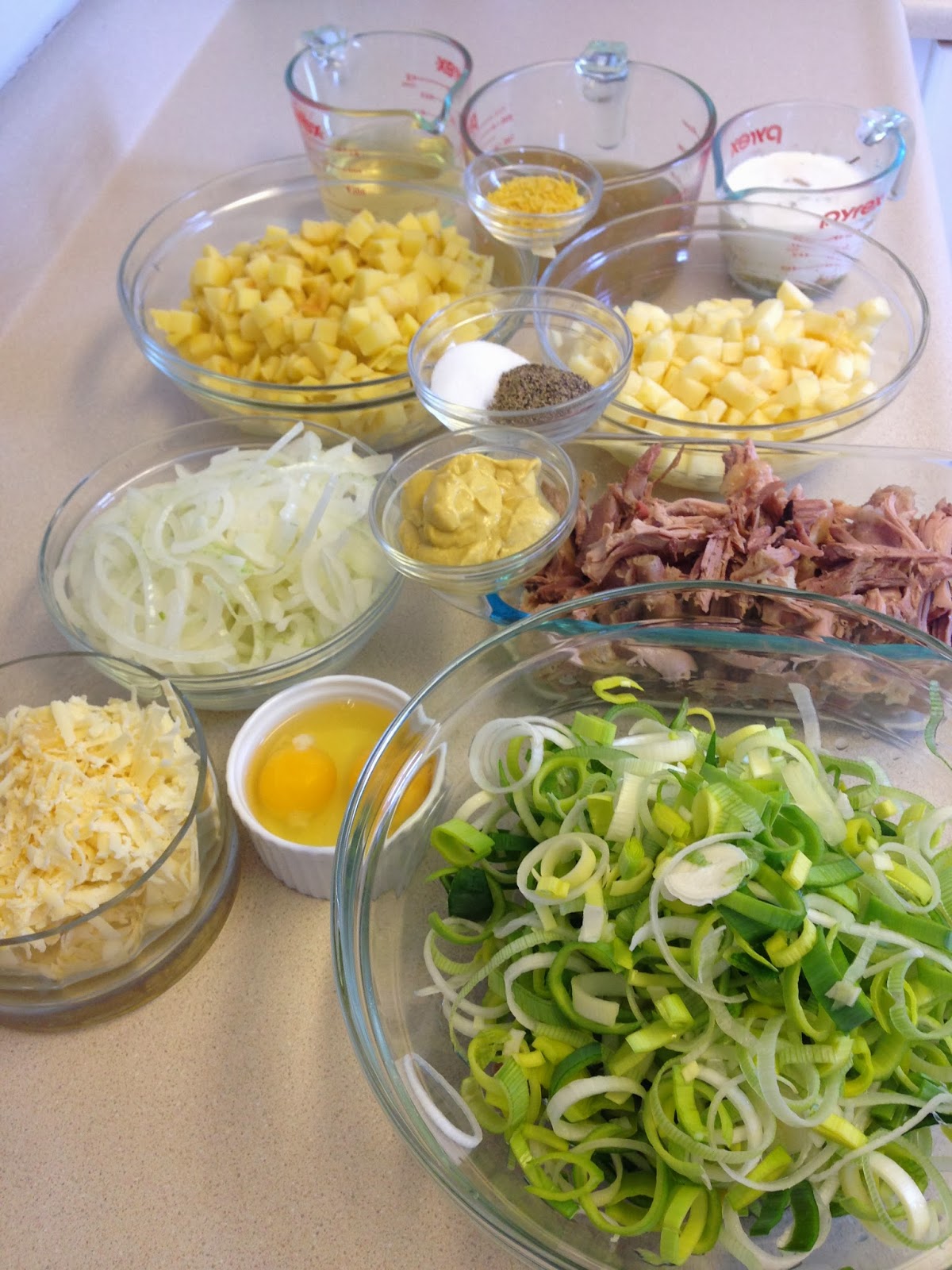 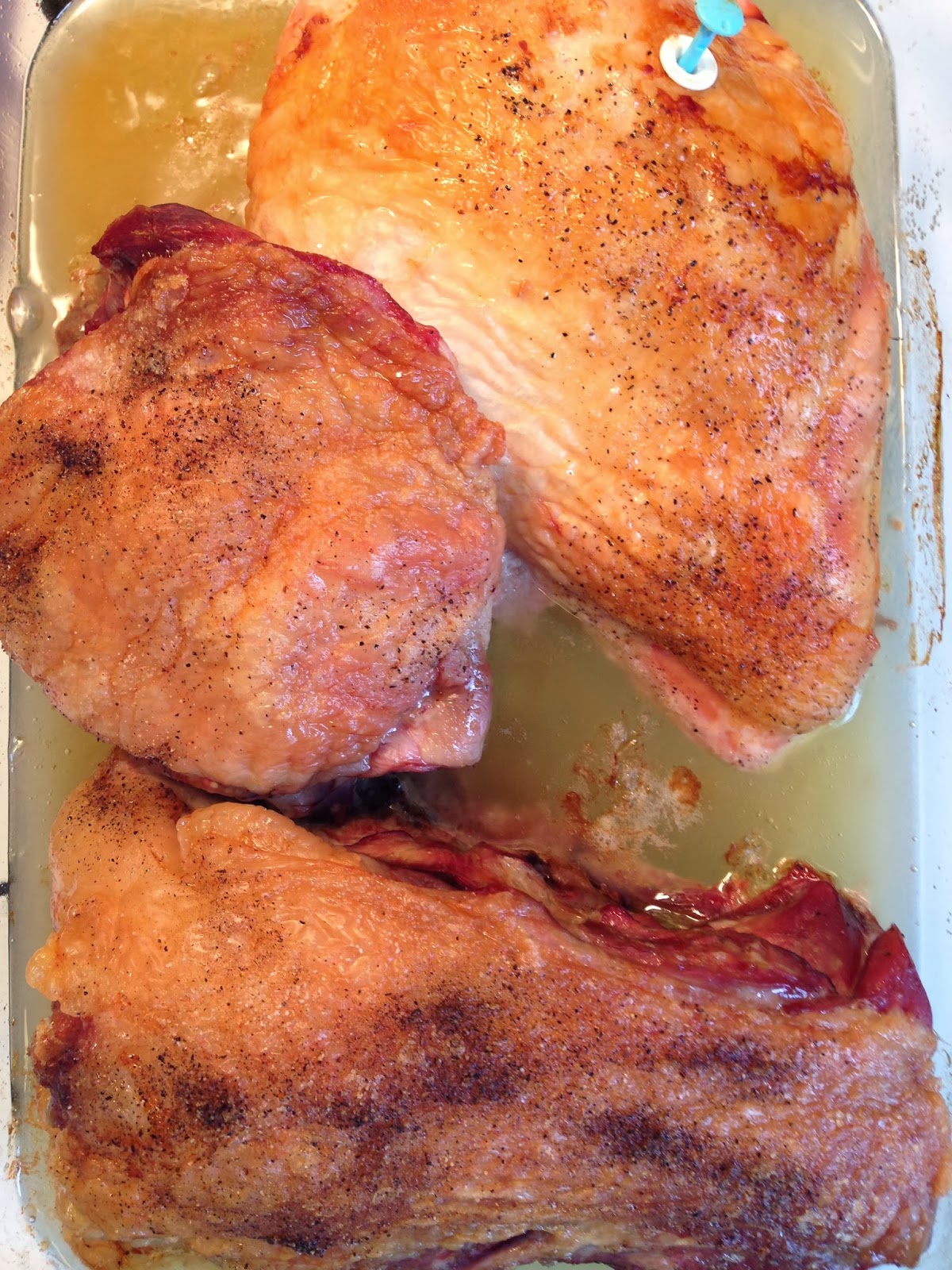 You will need a massive bowl to mix the pie filling.  I have a stainless steel mixing bowl that is two-and-a-half feet in diameter and it was nearly full when all the ingredients were in the bowl.  Once you pour the wet ingredients over the dry, fold gently but completely in the way that you fold egg whites into a chocolate mousse. 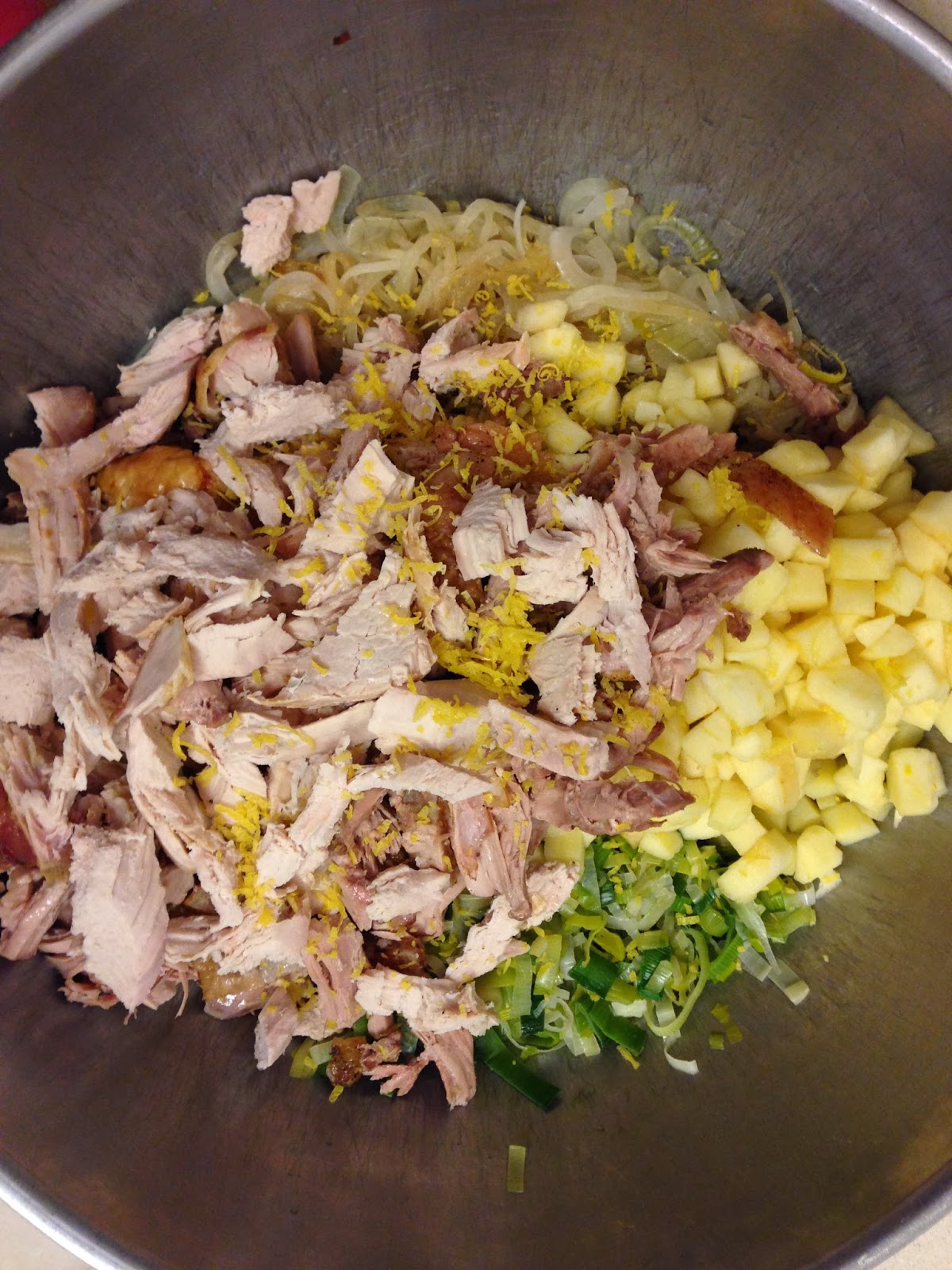 As for the pie dough, my recommendation is to follow the tried and true advice of all good pie dough recipes:  use frozen butter and don’t overwork the dough.  It really is as simple as that.  Even though I have a fancy new silicon roller, I still rolled the pie dough between sheets of plastic wrap.  As long as the pie dough is cold and sprinkled with flour, rolling and handling are a snap. 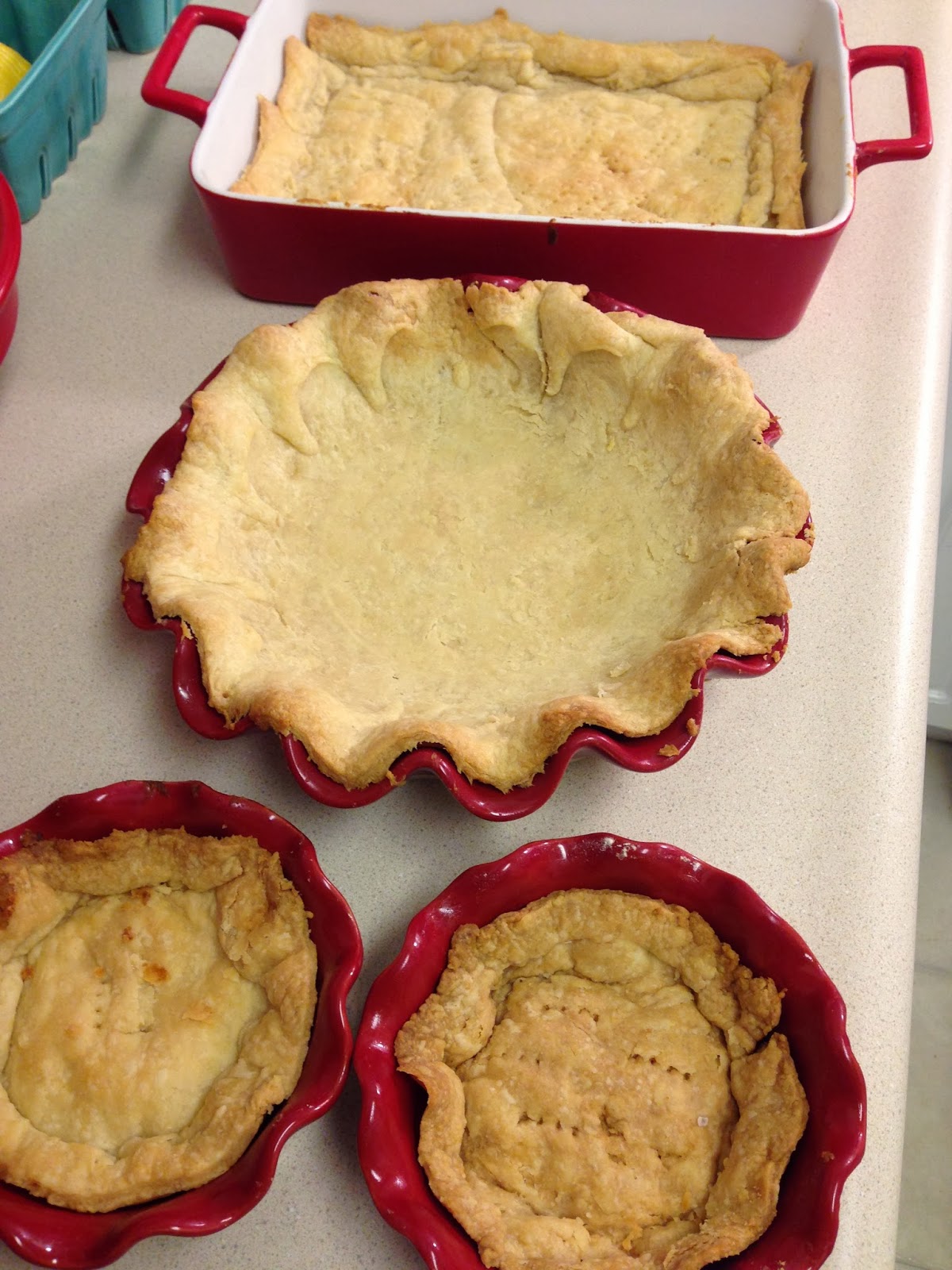 Baking the naked crusts is a must.  A crisp bottom crust is oh so buttery and savory and it helps to keep together the pie squares and wedges after baking.  Be generous when scooping the filling into the pie shells.  At the center of the pie, the filling should be between five and six inches high. 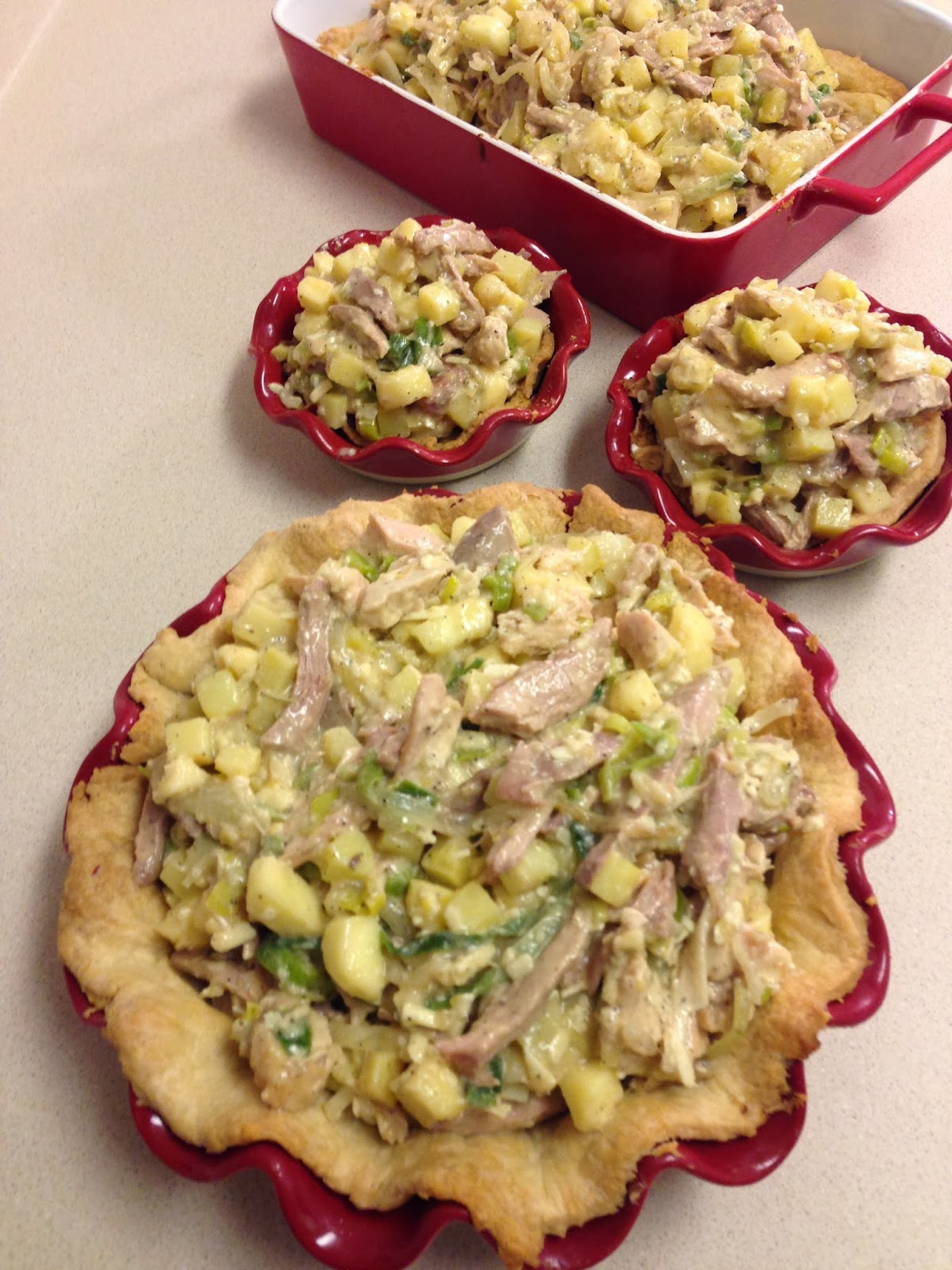 After covering each pie with the top crust, trim the pastry, decorate, brush the crust with an egg wash, and then bake in a pre-heated oven at 450 F for an hour.  You’ll know the pie is done when you see the juices bubbling around the ends of the pie.

The pies took us an entire day to make and they were gorgeous when we took them out of the oven.  The aroma awakened the dullest of appetites and it was nearly possible to simply feast on the beauty of the pies. 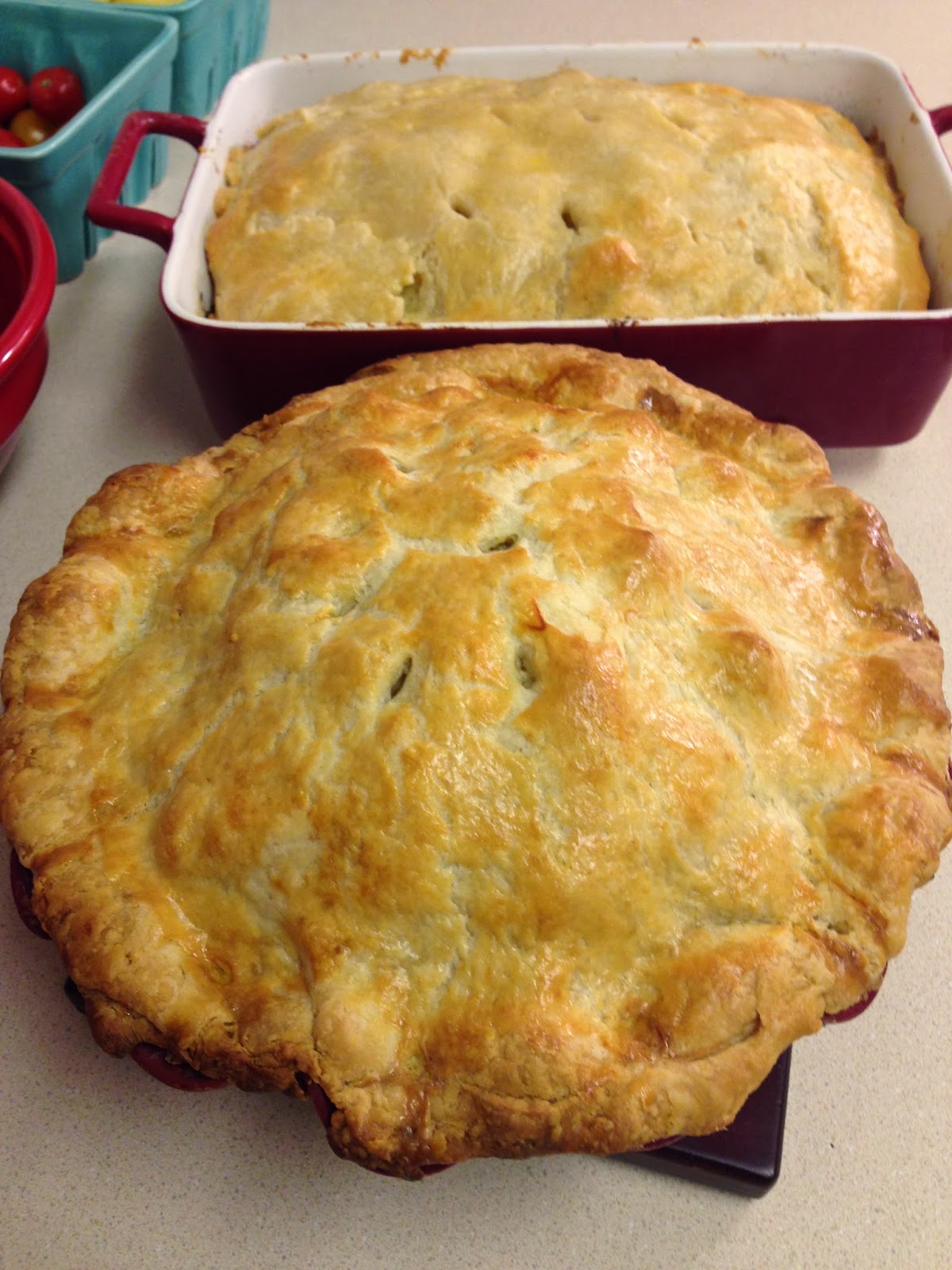 After cooling, we split one of the small pies.  The citrus reached a crescendo that soared above the savory meat and potatoes, the sweet leeks and onions and the tartness of apples.  The pie stayed in tact and remained moist as the potatoes absorbed much of the liquid and all of these wonderful flavors were enrobed in a crisp and buttery golden crust.

For about a week we ate Leek Turkey Pot Pie with a simple salad of spinach, clementine sections, almond slivers that were tossed in a champagne vinaigrette.  We put the large round pie in the freezer for us to enjoy as winter turns to spring.

Email ThisBlogThis!Share to TwitterShare to FacebookShare to Pinterest
See More About Make