Stew for the Darkest Depths of Winter 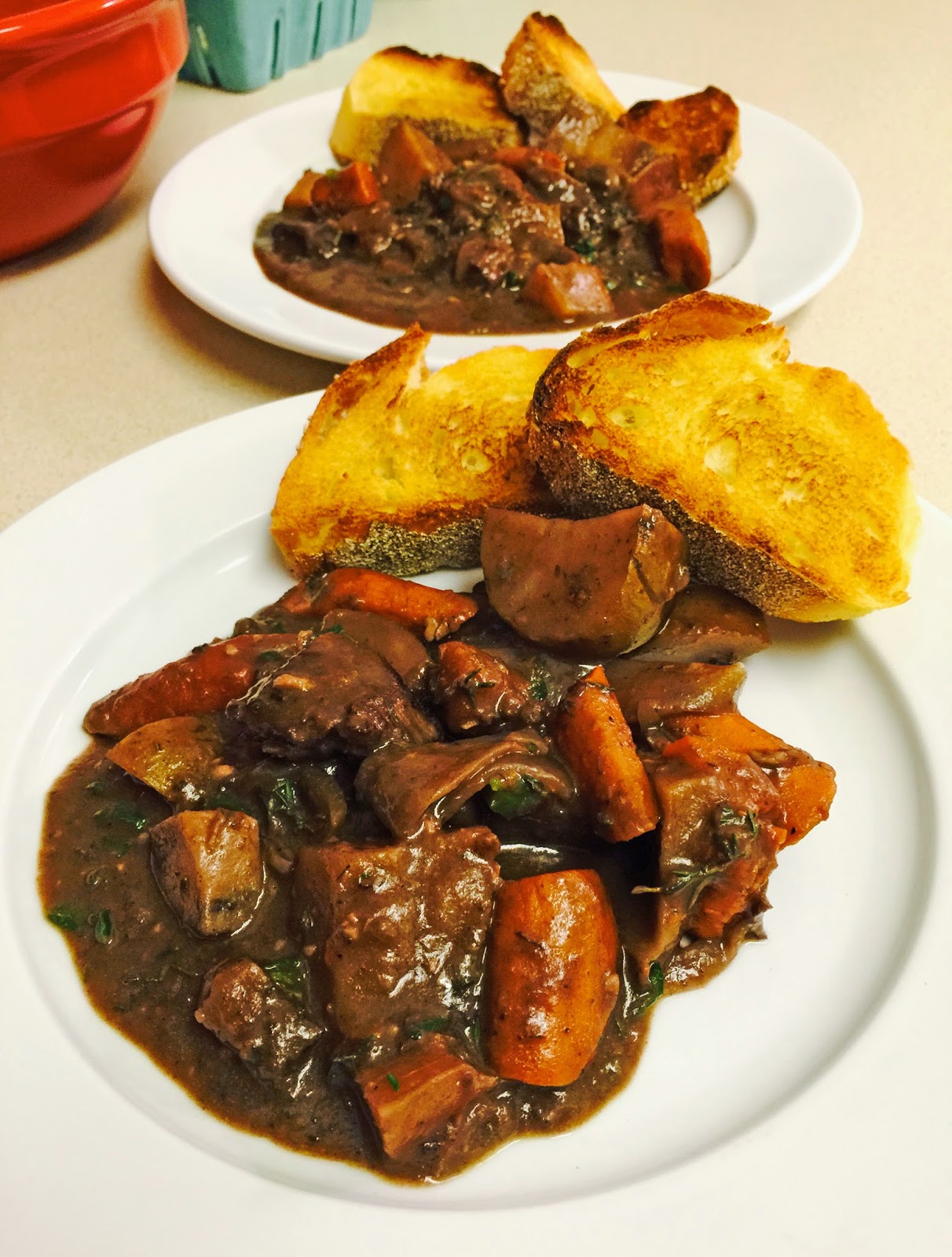 Stew is a dinnertime staple during the cold winter months but it doesn’t have to be prepared the same way year after year and meat doesn’t have to play the leading role in this winter production. 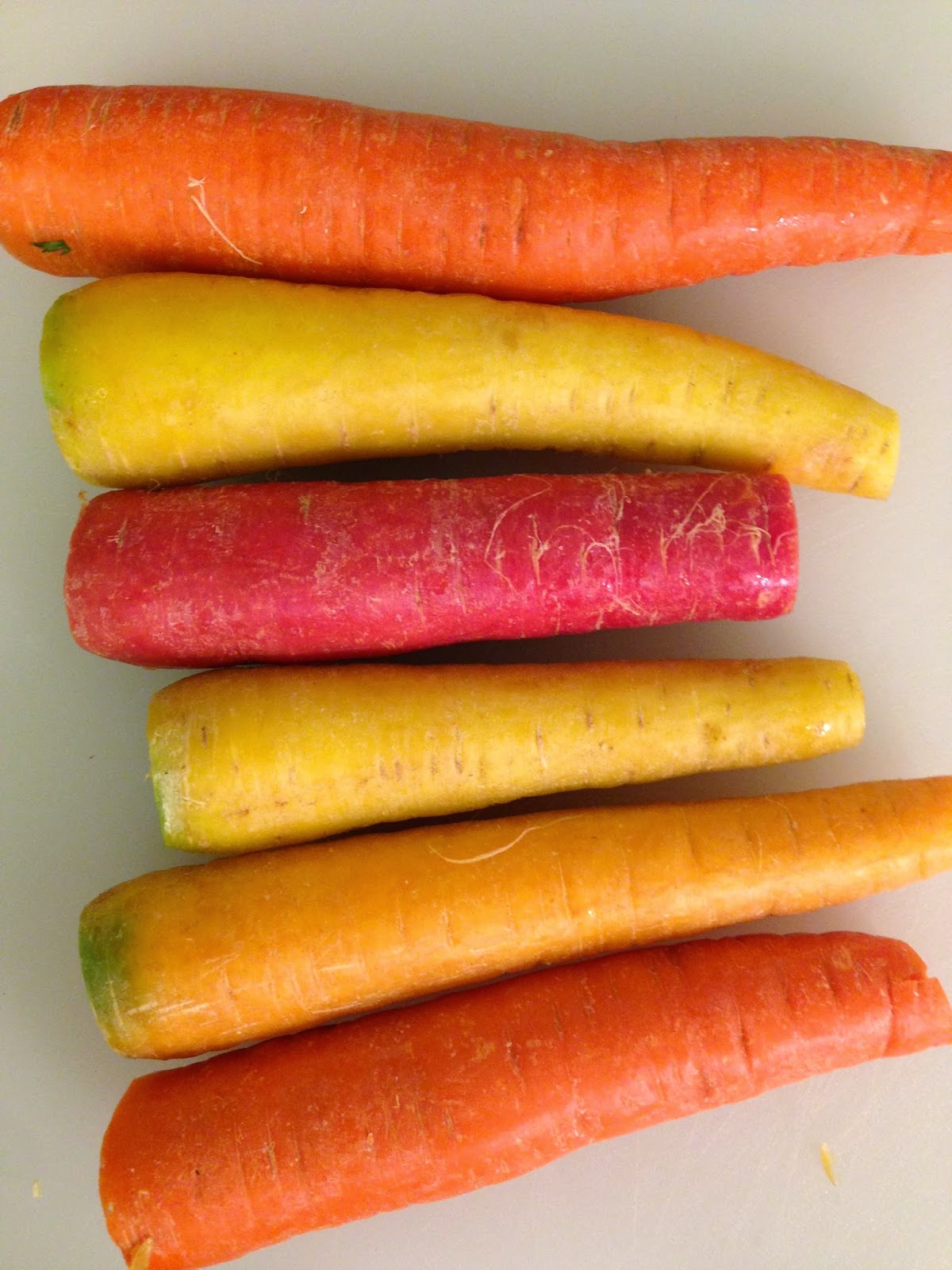 We may not get around to eating stew until the temperature dips below freezing and we’re blanketed in snow but we generally cook stew at the end of the Fall when root vegetables are plentiful and a downright bargain at the local farmers market.

It’s late November when our 10-quart Dutch oven goes into overdrive.  That’s when we’re preparing stews and casseroles with just-harvested onions, parsnips, carrots, potatoes, and a few other surprising ingredients to spice up the winter standard known as stew.  As soon as the stew is done cooling, we ladle it into one and two quart glass containers and put them into the freezer.  This is our form of flash freezing to preserve the freshness, flavor and sugar content of root vegetables before quickly converting to starch. 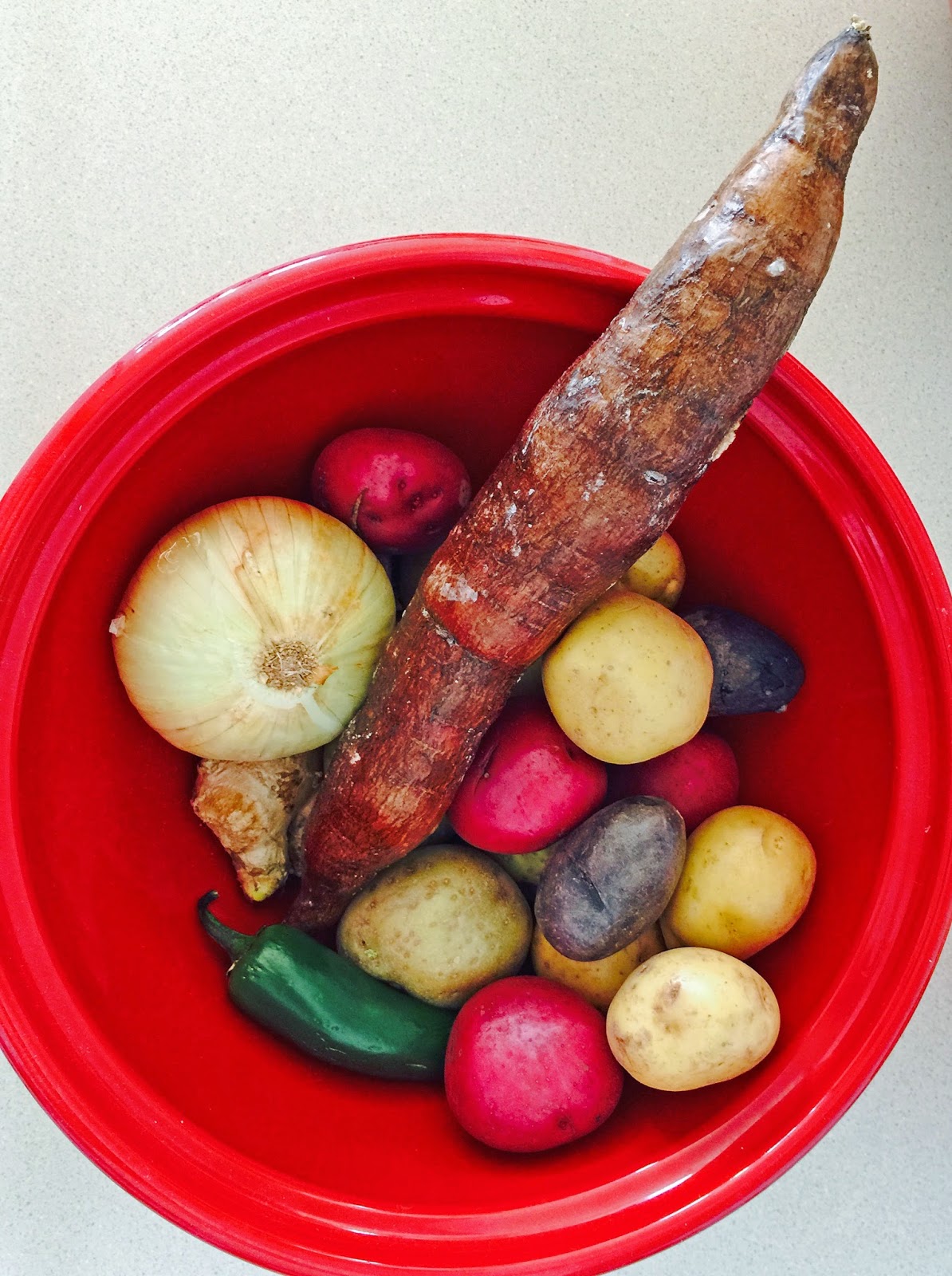 Speaking of starch, the surprise ingredient in this stew is yuca, the edible root of the cassava plant.  Yuca has a starchy and more fibrous texture than a potato so we thought it would be a great ingredient to feature in greater abundance alongside the morsels of succulent beef.  To further “beef-up” the root veggies in this recipe, we decided to oven roast the carrots, potatoes, yuca, and parsnips to preserve their dense chewy texture.

This recipe will make about ten quarts of stew, which is between 30-40 servings.  For us, this is enough stew for even the longest winter and it’s the perfect dish for dealing with the harsh cold of winter.  It’s mighty substantial with plenty of meat and potatoes and its spray of color from the rainbow carrots is a pleasant reminder of the last days of the farmers market when an abundance of root vegetables of all shapes and colors offers so much cooking possibility. 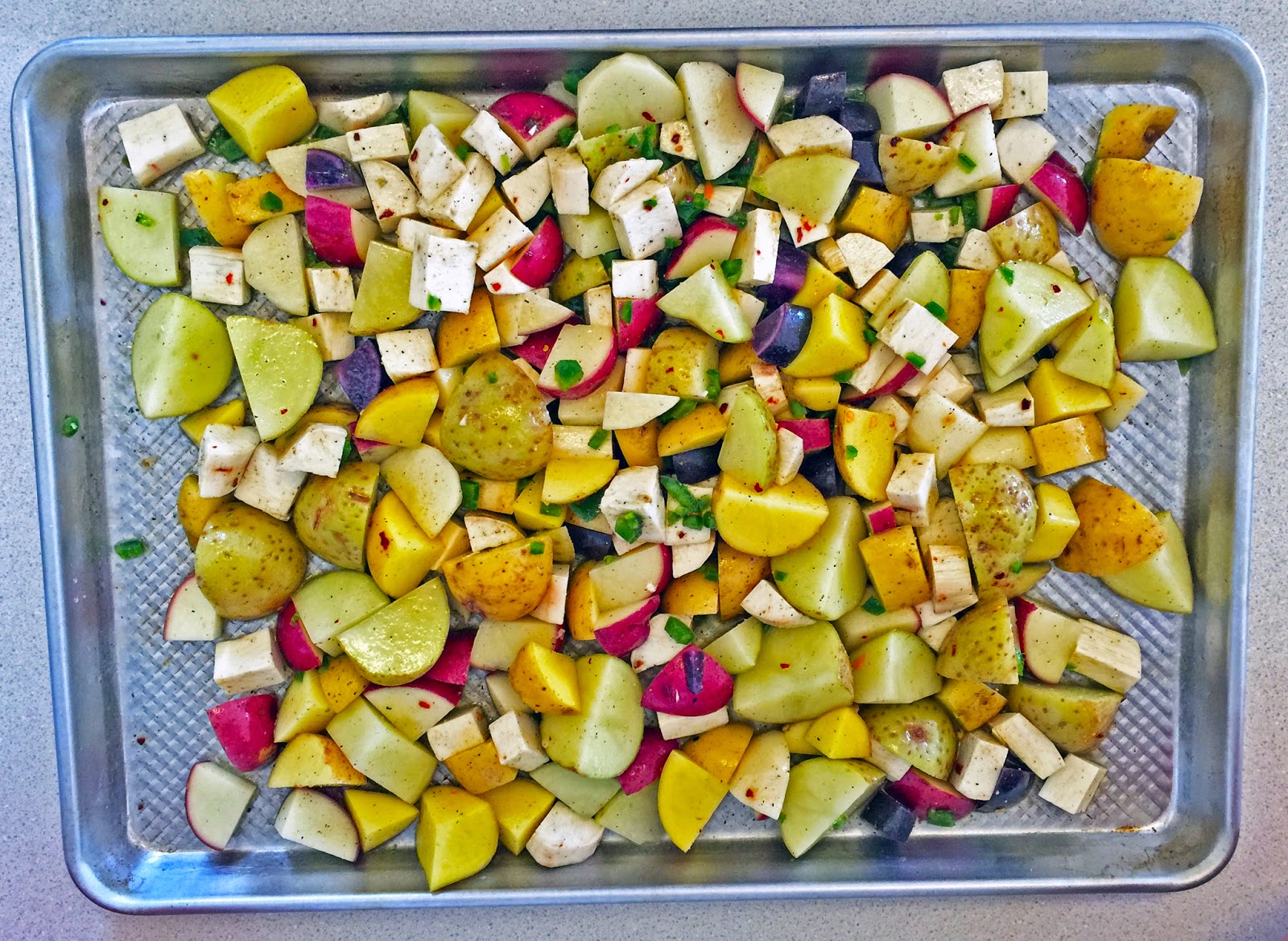 It’s best to set aside an afternoon to make this stew.  There is a lot of preparation before cooking so you may want to prep all the ingredients on one day followed by a second day of cooking, cooling, and storing.  Don’t be put off by the preparation.  It’s fun and you’ll essentially be cooking the equivalent of ten family meals. 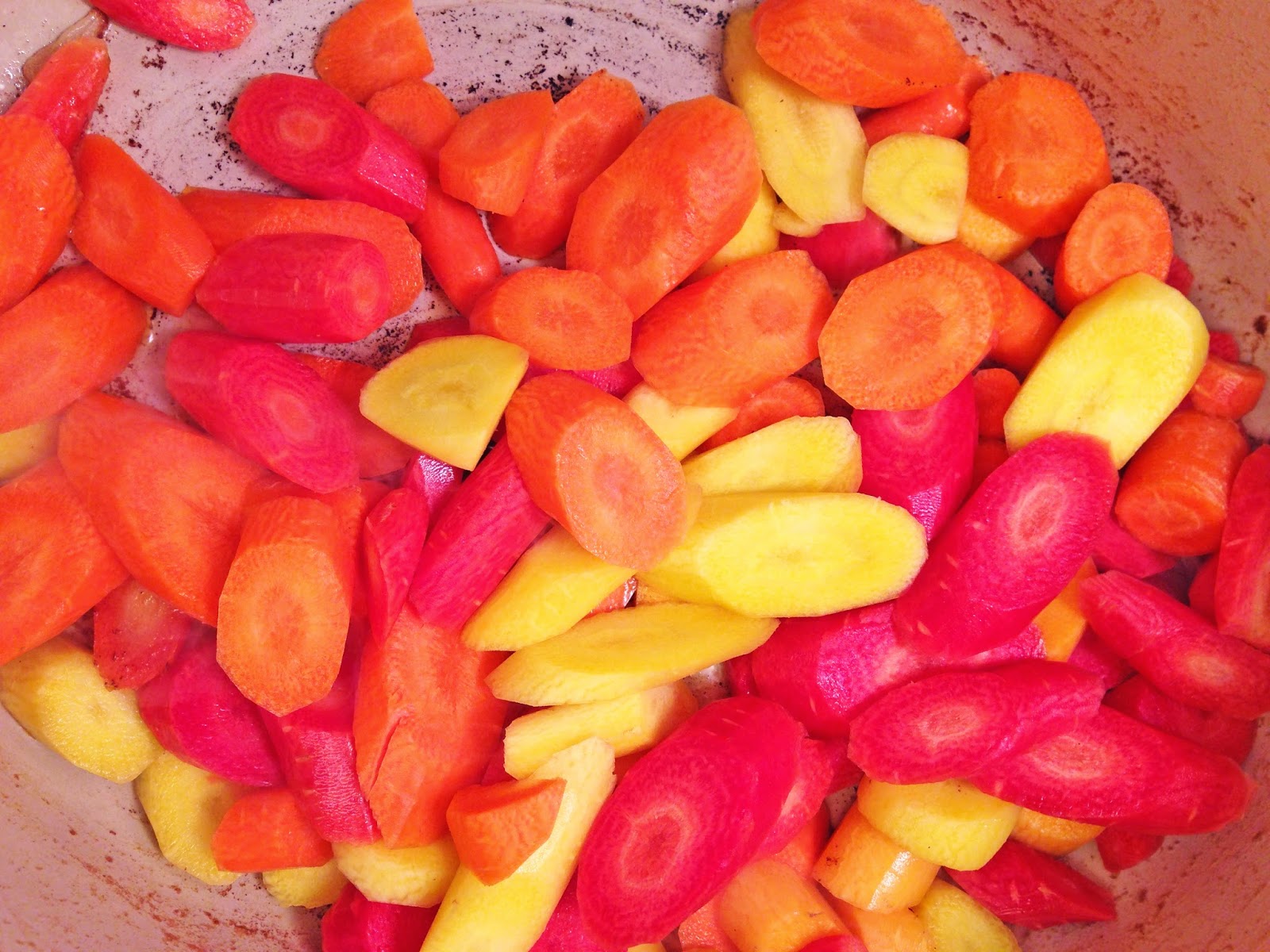 Peel and cube the carrots, potatoes, yuca, and parsnip into 1-2” chunks.  Coat with olive oil, season with salt and pepper, and then roast on two cookie sheets in a hot oven at 425 F for about 30 minutes or until the vegetables have caramelized nicely on all sides.  You’ll have to turn the vegetables a few times for them to brown evenly. 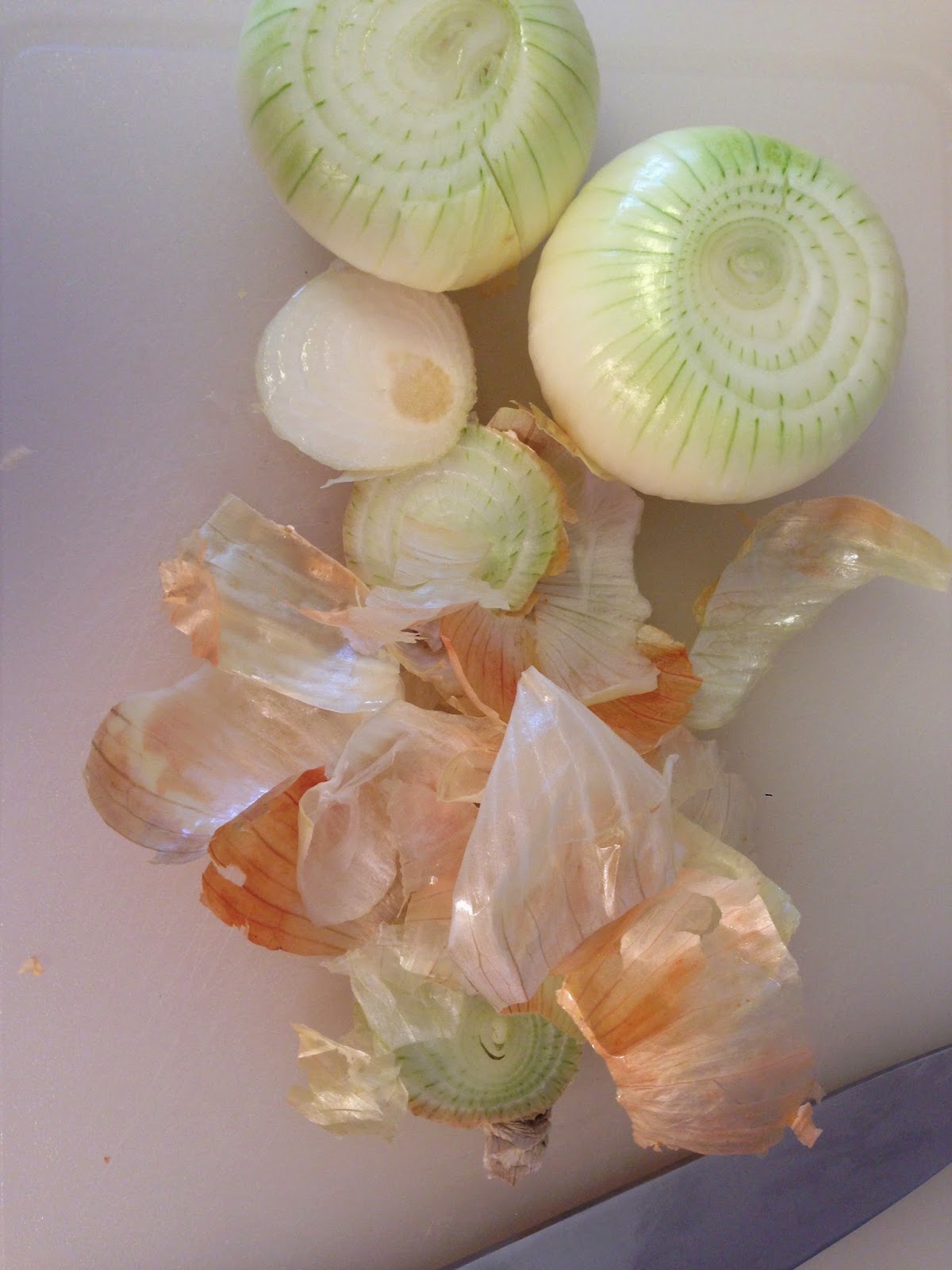 Peel and course chop the onions and garlic.  Put aside in a bowl.

Dredge the beef cubes in seasoned flour and brown in hot but not smoking olive oil.  Brown the beef in small batches so you achieve a nice crisp texture.  Then place the browned beef on paper towels to absorb the excess oil.

Once all the meat has been browned, sauté the chopped onions until they begin to caramelize.  Once the onions have started to brown, add the beef cubes, and the two bottles of red wine to the Dutch oven.  Season with two tablespoons of salt, one tablespoon of dry mustard, one tablespoon of black pepper, one tablespoon of smoked paprika, and one teaspoon of ground nutmeg.

Remove the Dutch oven from hot stove and put in a cold place to quickly cool the stew.  We usually put the stew on the terrace for a few hours and then bring it back into the house for the ladling.

The best method for ladling is to line up the glass containers and place one ladle of stew in each container at a time to ensure equal distribution of the meat and vegetables from the stew.  If you don’t ladle the stew this way, you will have some containers that are all meat and others that are all potatoes.

Once done ladling, cover the containers with the plastic or glass lids and place in the freezer. 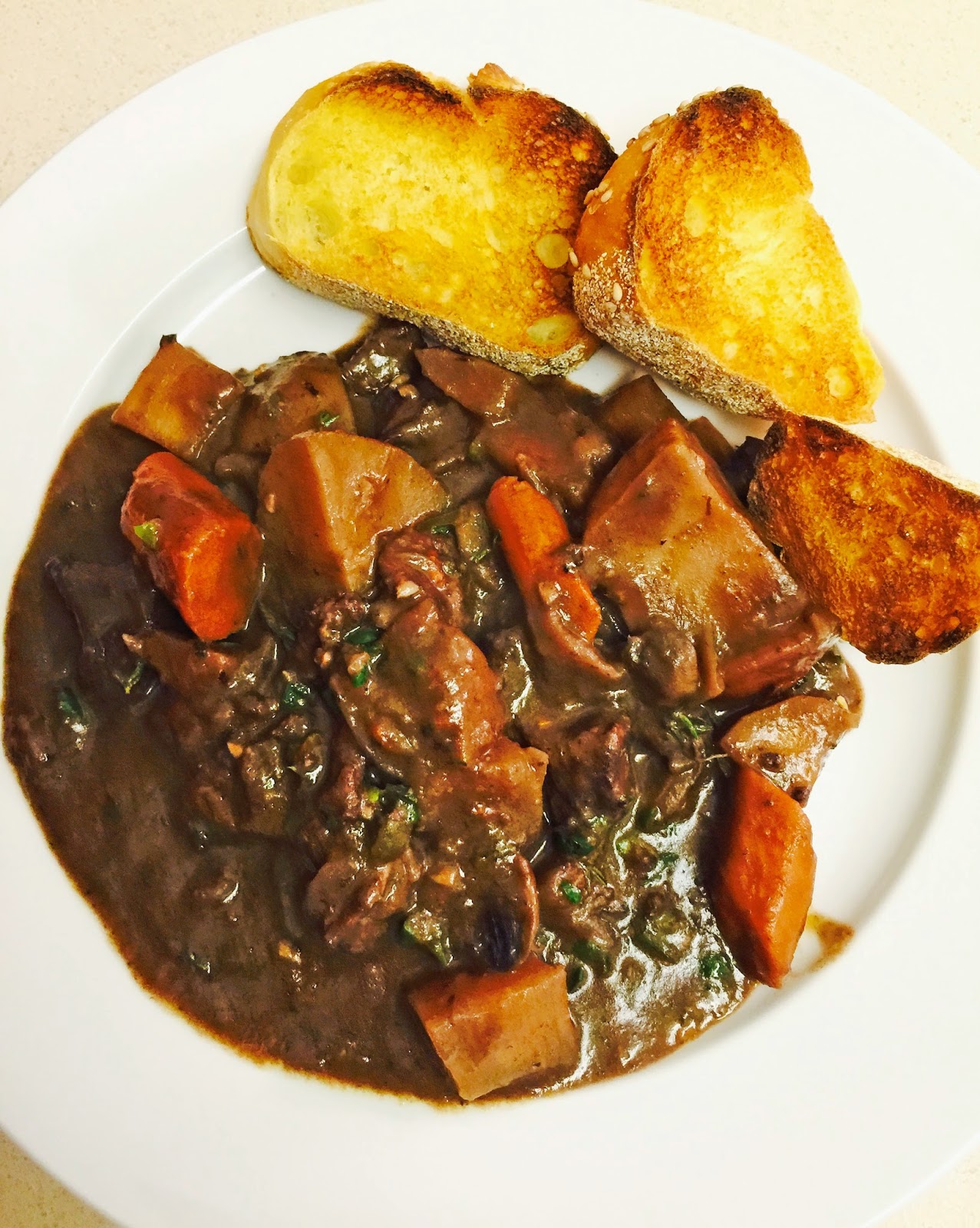 During the winter, we always try to have on hand a quart or two of stew in the refrigerator that’s been defrosted.  This way, hot stew can be on the table in a few minutes after a very quick reheat on the stovetop.  Once hot, ladle the stew one final time into wide-rimmed soup bowls or plates, top with chopped fresh herbs, and serve with crusty bread to sop up the delicious savory gravy.