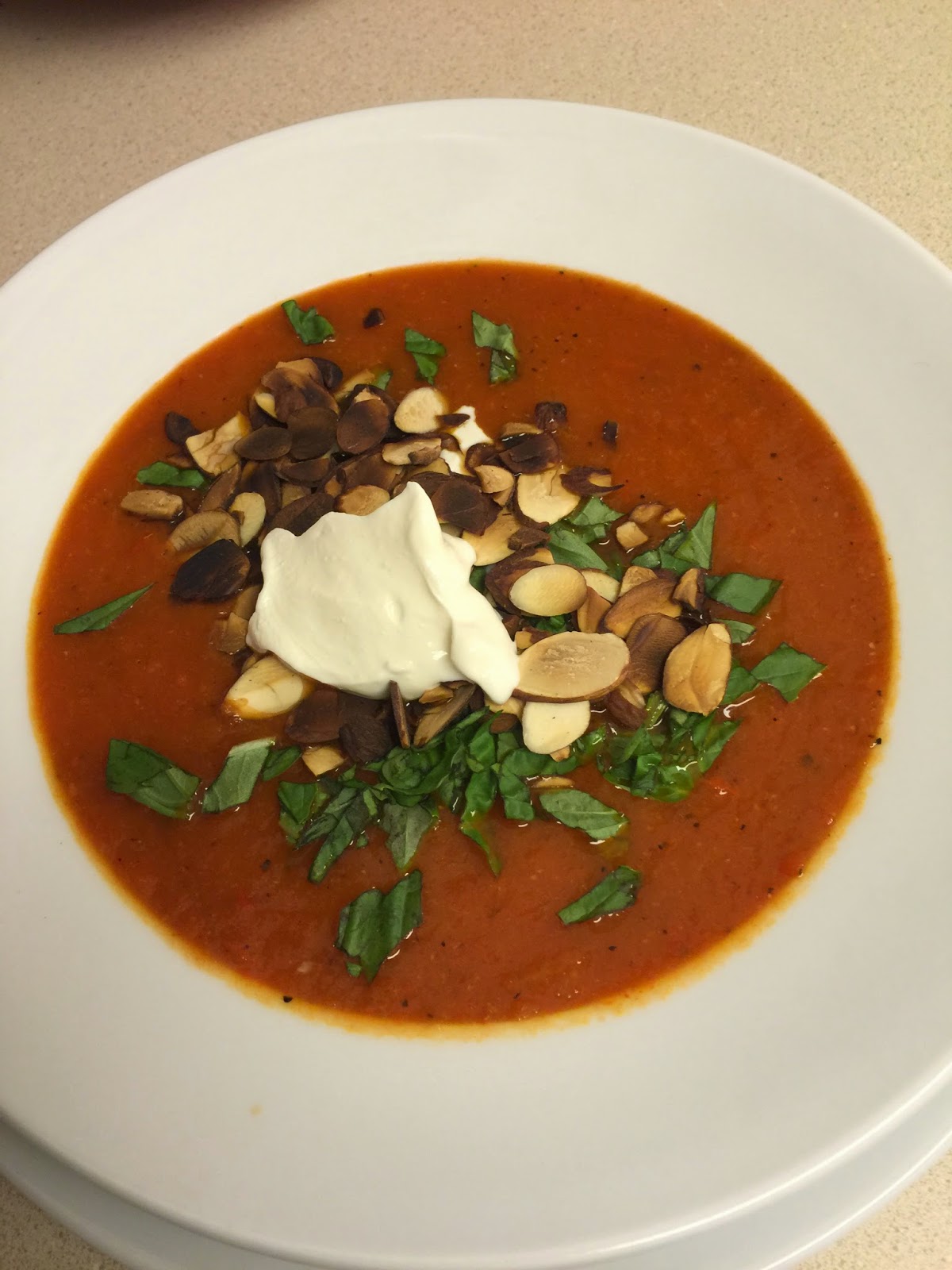 It’s taken me too long to make soup from vegetables that are past their prime.  This week the papers were full of articles about food waste so I was inspired to make soup from the pile of wrinkly and forlorn vegetables that have been sitting on the kitchen counter for the last two weeks.  Instead of putting them in the compost heap or worse yet the trash, I was motivated to make something delicious from them after reading about Dan Barber’s new food waste pop-up, WastED, and what’s happening in Portland, Seattle, and San Francisco to make composting go mainstream. 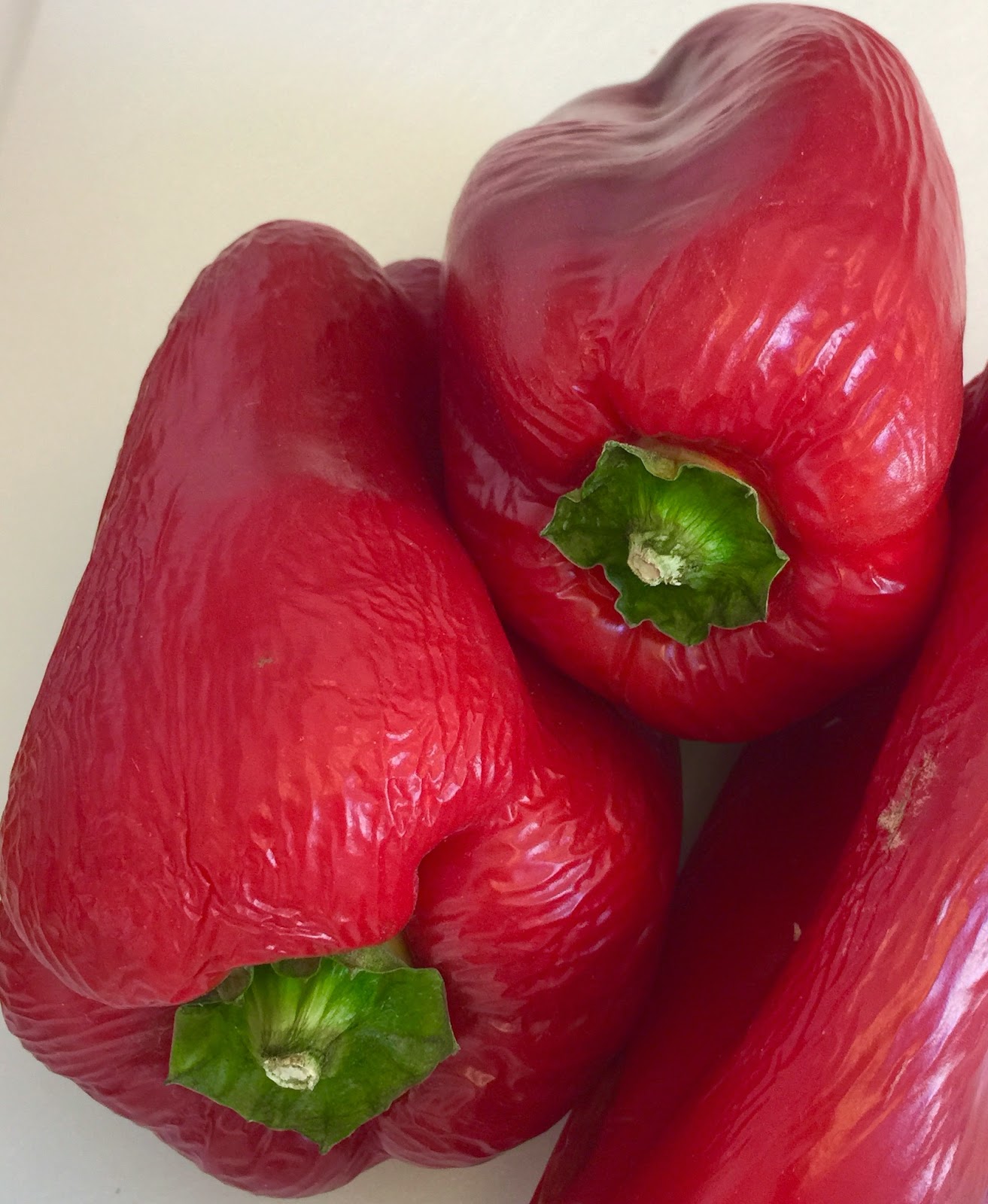 The big new idea is that food waste is moving beyond the good food movement and becoming a broad consumer concern.  The numbers on food waste are staggering.  It’s estimated that about 31% of all food in the United States is wasted and the estimates for global food waste are even higher.  What makes these food waste statistics all the more intriguing is the imperative to expand food production by 70% by the year 2050 to feed a world population of 9 billion people. Tackling food waste has the potential to possibly lower the expansion of food production to 40% in a 35 year period.  That works out to about a percent a year, a much more manageable target that can be achieved without further harsh impact on land, water, and air.   Clearly, food waste is part of the solution to feeding the world population today and in the future. 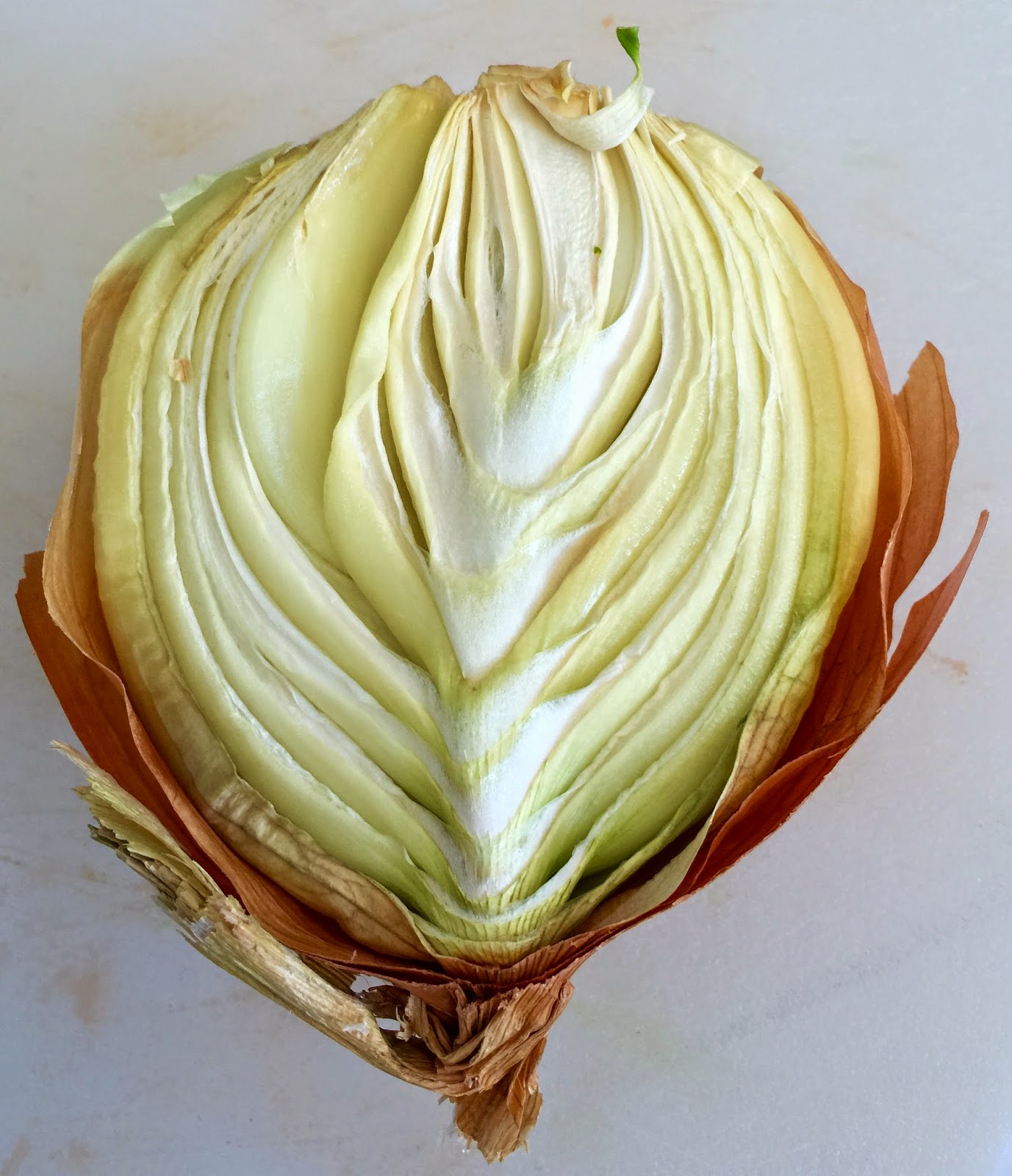 What’s exciting about food waste is that it’s entering mainstream conversations and is being understood as the complement to the local food movement.  Local food production and food waste form a reinforcing closed-loop with many environmental and social benefits.  They both work hand-in hand and are part of one virtuous local food system where locally produced food builds the local economy, expands access to varied and more nutritious food, and tackles food insecurity at the local level, right where it hits hardest. 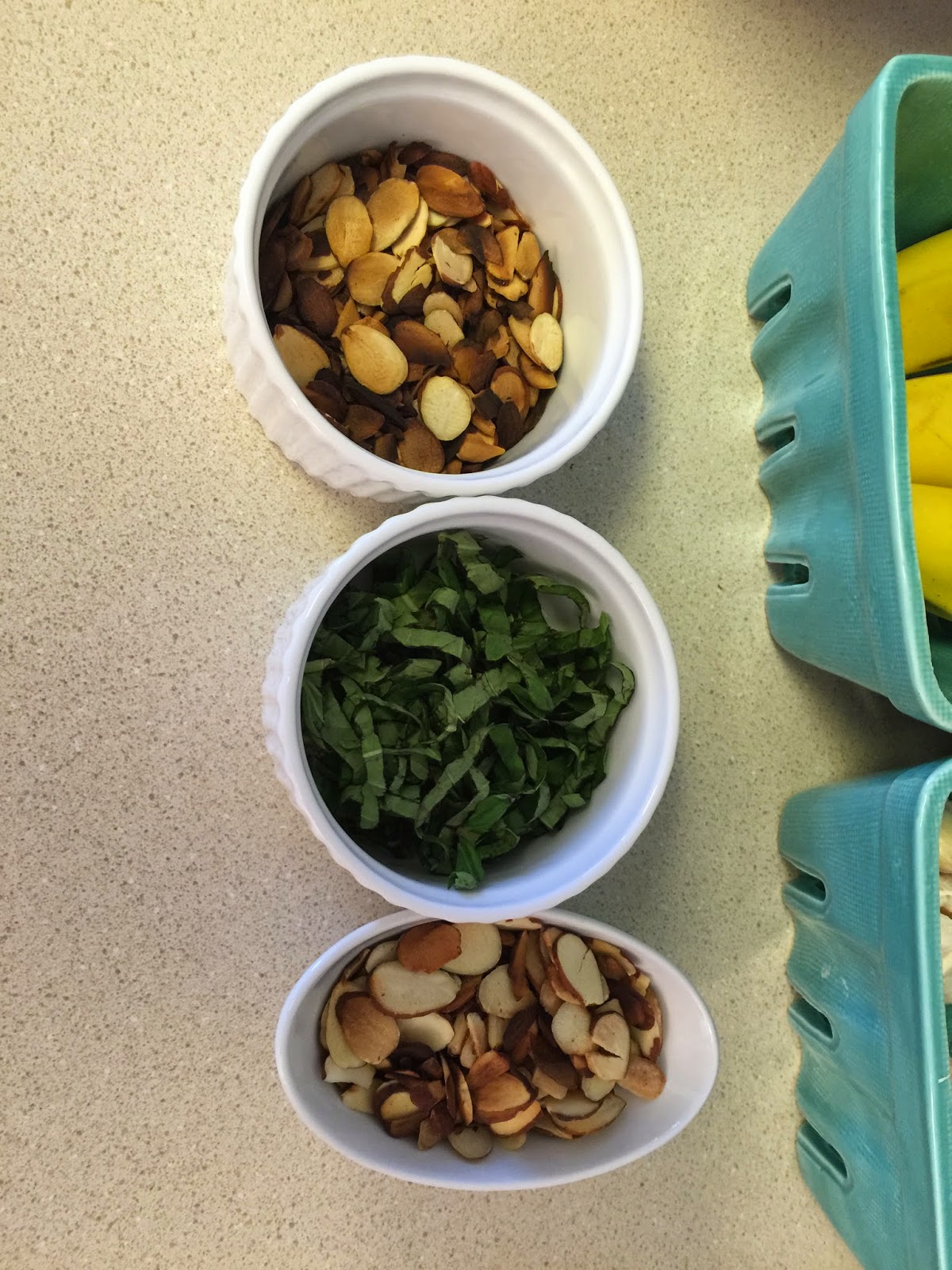 Minimizing food waste and returning compostable matter to the soil also contributes to this virtuous cycle by dealing with the waste side of the equation.  It creates markets and builds the local economy by diverting healthy and nutritious food from the landfill and bringing it to food-insecure local communities that simply do not have access to fresh food, choice, and variety.  It also channels compostable matter with precious carbon sequestering and fertilizing abilities right back to the local food producing soil.  It’s an elegant, robust, and sustainable closed loop.

Until recently, my understanding of local food was only defined by food miles and the distance between where food is grown and raised and where it is consumed.  While correct, that’s a narrow and literal definition of local food.  I think PhilAckerman-Leist does a really good job of capturing the broader concept of local food.  He says the local food discussion is at its best when the conversation is an expression of caring, caring about local landscapes, the ecological impacts of distance, our sense of place, the people and their needs in our communities, and the building of various economic relationships at the local level.

Reading about local food and food waste has gotten me to see food, and local food in particular, differently.  I now try to see food as a precious resource and not as a limitless commodity.  This shift in mindset has added some new constraints to my cooking and eating but it’s also opened me up to many fresh ideas and tasty dishes such as this gorgeous and delicious soup that was literally rescued from the trash bin. 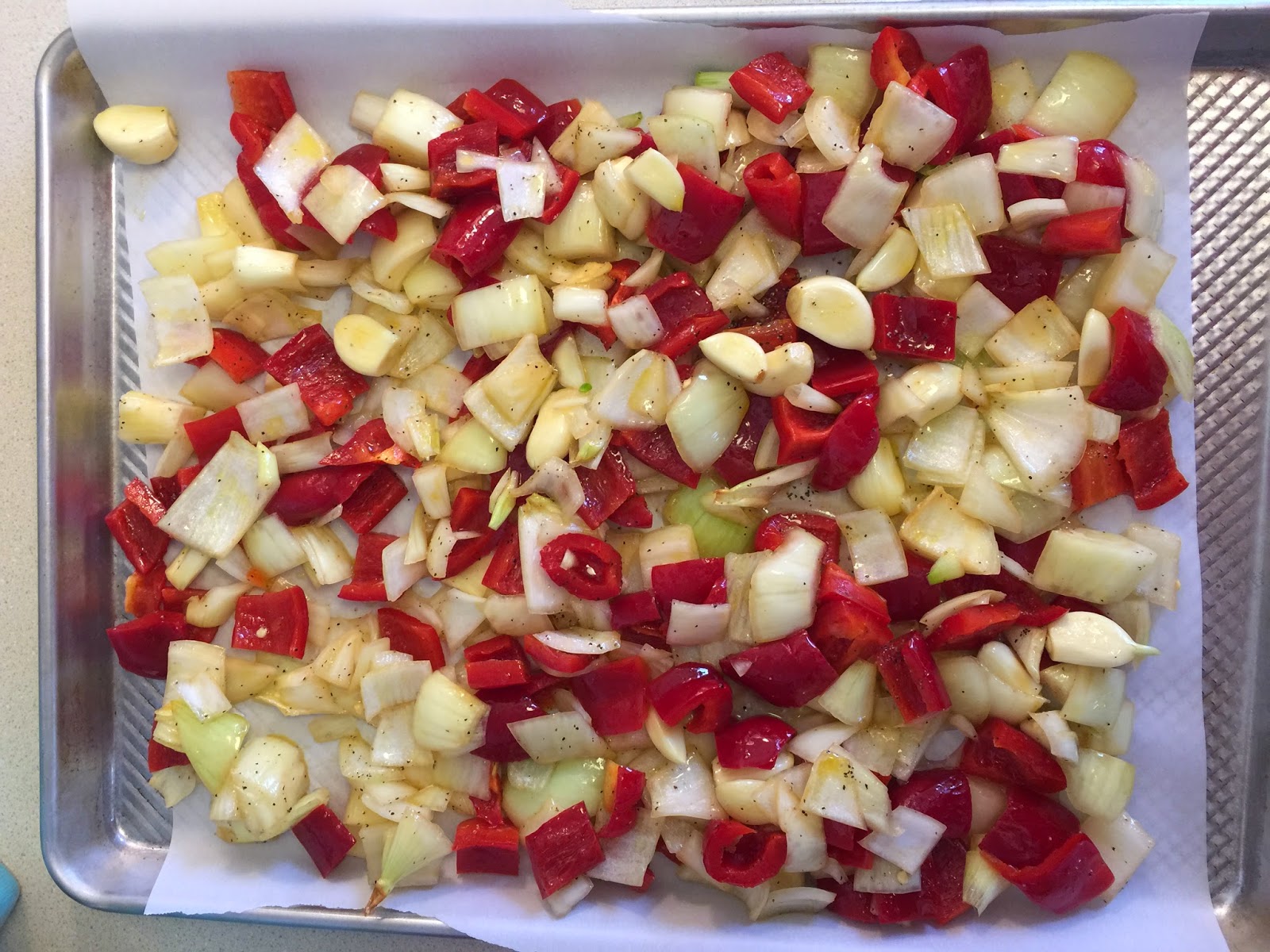 Even though this recipe is very simple and not time consuming, it is best prepared a day or two ahead to allow the flavors to mature and meld. 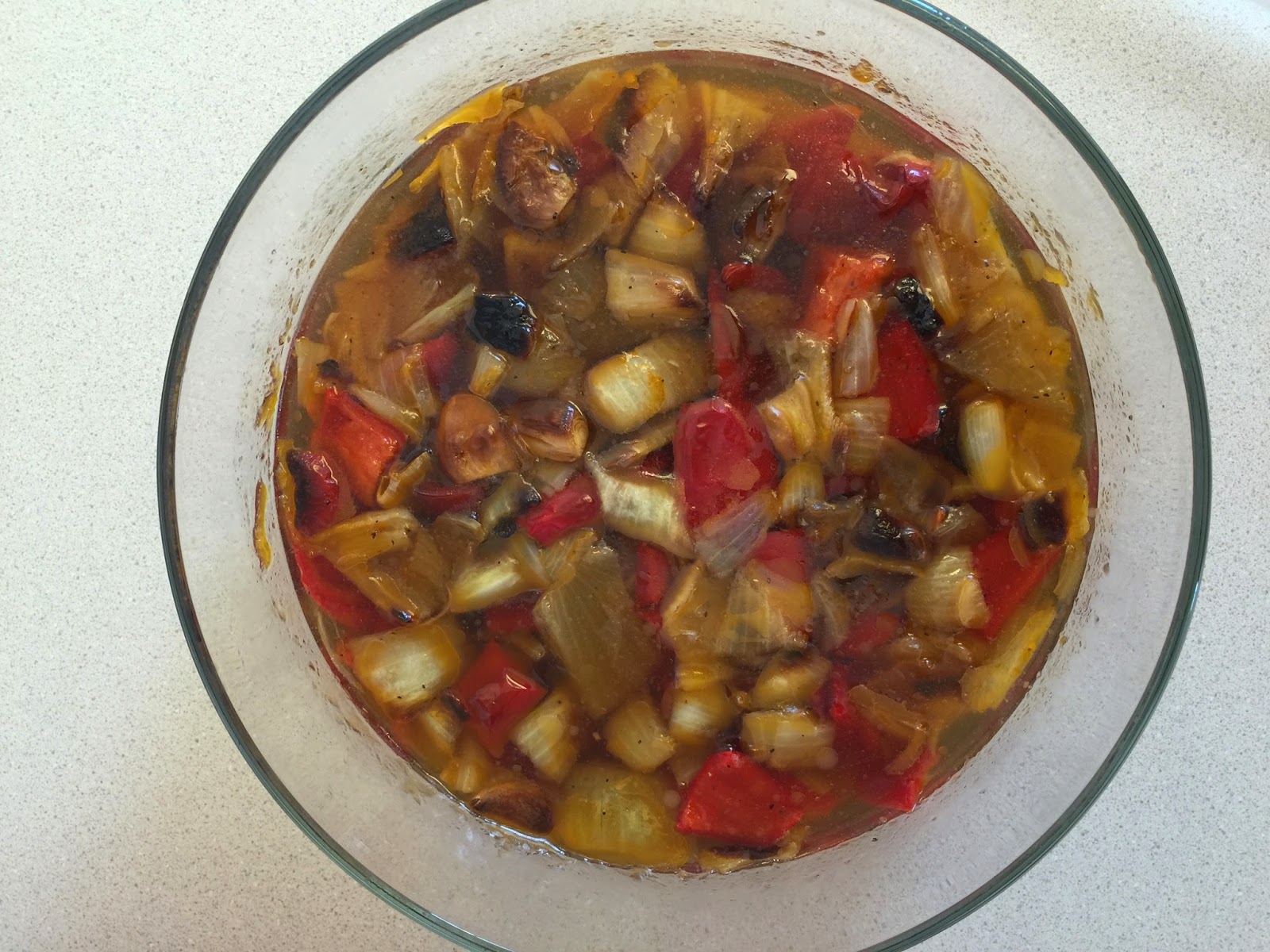 Begin by peeling and chopping the onions into big chunks.  Remove the seeds from the peppers and conserve for planting or composting.  Chop the peppers into large chunks.  Remove the outer skin on the garlic and reserve for composting.  Toss the onions, peppers, and garlic in the olive oil along with the salt and pepper.  Spread the vegetables on a baking sheet lined with parchment paper and roast in the oven for about 40 minutes. 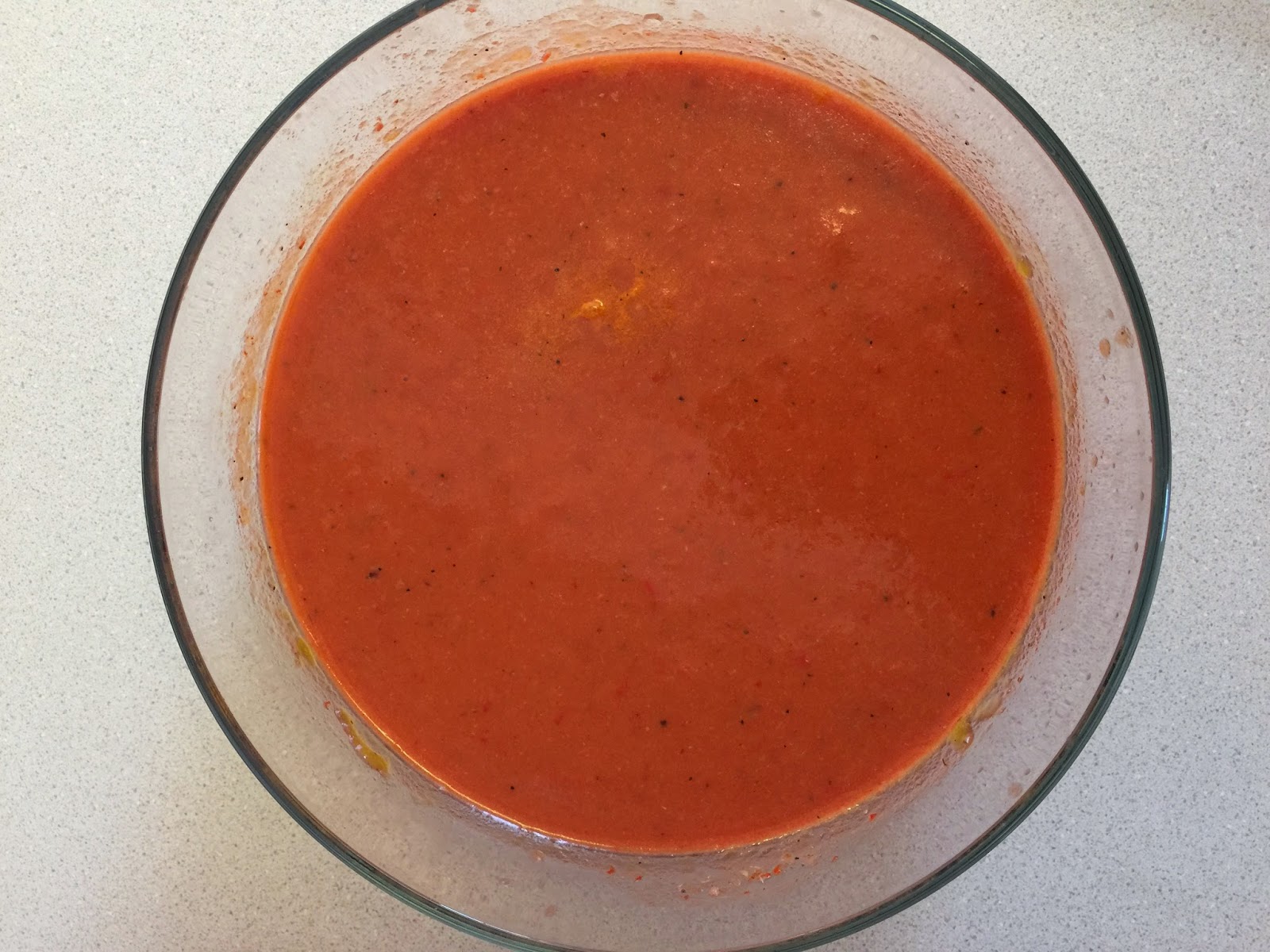 Once the roasted vegetables are cool, put them in a bowl with chicken stock and then store in the refrigerator overnight.  On the day of serving, puree the roasted vegetables and chicken stock using an immersion or conventional blender.  The puree should be an earthy red color.  After blending, stir ¼ cup of heavy cream into the puree and then heat gently on the stove top.  Continue stirring to fully incorporate the cream into the soup and be careful to not boil it.  The solids in the heavy cream will separate and the soup will look like it has been cooked with scrambled eggs. 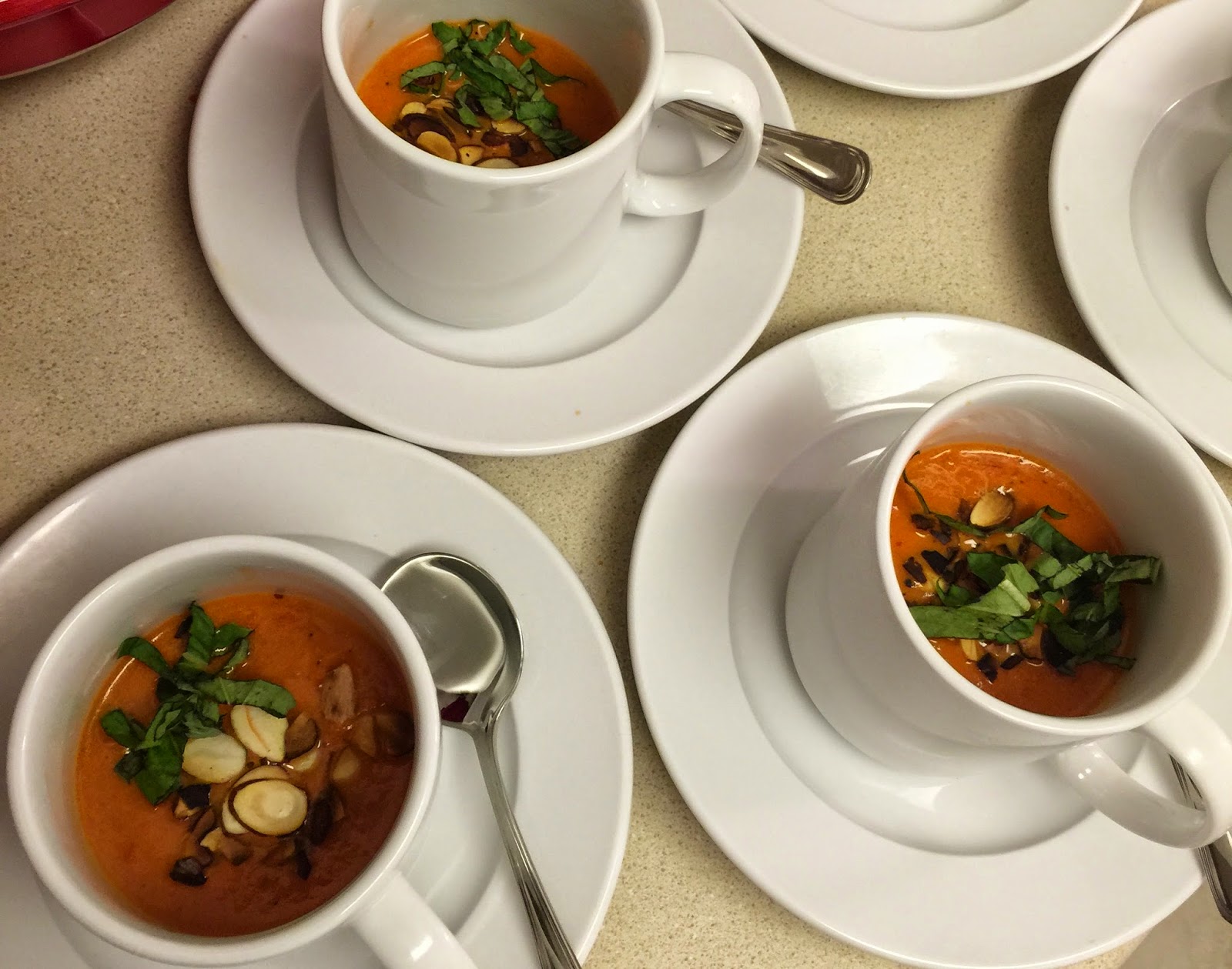 Once the soup is warm, ladle it into soup bowls and top with croutons or toasted almond slivers, fresh chopped herbs, and a dollop of sour cream.
Posted by Speaking About Food

Email ThisBlogThis!Share to TwitterShare to FacebookShare to Pinterest
See More About Learn, Make